We were playing table tennis and having a mess around with the rules of the game the other week.
We didn’t have enough bats to play in pairs, so I suggested we raided the kitchen for some pots and pans.

Here’s what it sounded like, sound recording by Mammadou. 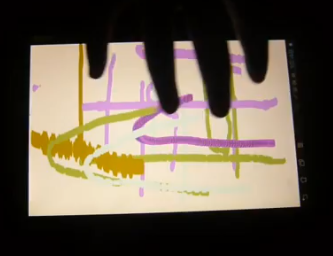 Today we altered some coding to make images appear on an android based tablet. This was done by using processing to create and upload a multi touch sketch onto the tablet and then using our fingers to make the images appear. 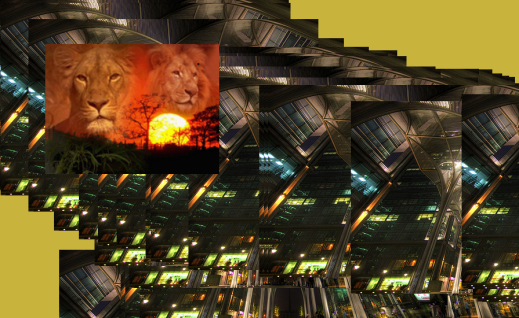 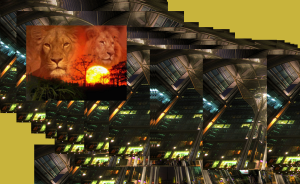 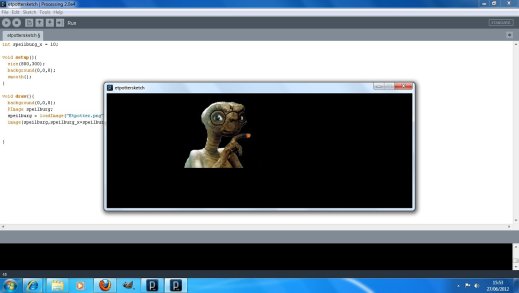 Today we learnt how to insert images into processing. 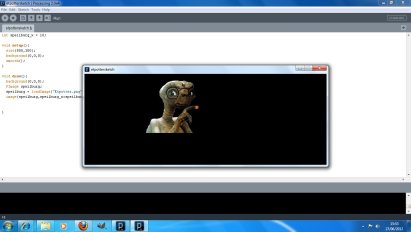 This is the image I added to myprocessing sketch. I had originally edit the image in “GIMP” and have altered some of it’s characteristics to make it animated in Processing. On a side note I would like to mention, I got this image  from the internet, and I do not claim it is my own. I used it for educational purposes only. 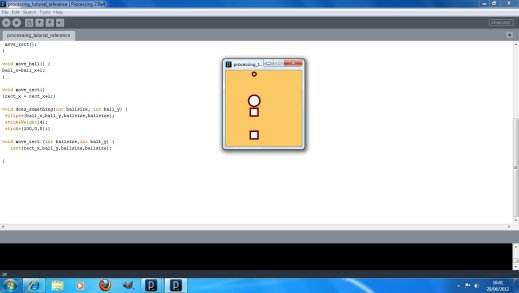 Today we have worked on simplyfying code functions in Processing. 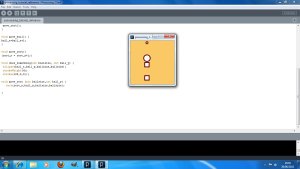 We did this by putting some of the function coding into their own sections, and then writing some refferance coding in the “Void Draw”” section. This process does the same features as without reffering, but it stops all the coding looking crammed together. 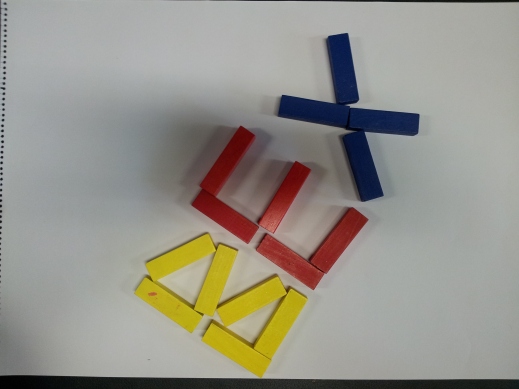 Here are some very short videos of ideas to change Pong.

The group used wooden blocks to visualize how the games might work.

Leslies’ idea for a variation on Pong mixed with pinball & dominos

Here is how the group rated it..

There is freedom of movement, more than there is in Pong.

There is a degree of coperation because you are agreeing to cooperate to play the game in the first place, but you are then competing against each other.

You have to have someone else, yu can’t play it by yourself.

It’s very simplistic isn’t it, if something gets thrown at you you are going to hit it away.

You might have to be creative to out fox your opponent, e.g. to do a move that surprises them, but this isn’t much creativity.

It reminds me of childhood, and it is quite competitive. Competitiveness is 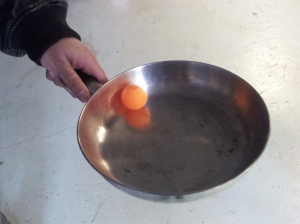 We wanted to play doubles but were short of bats to play with, so we had a root around the kitchen and found a frying pan, a tray and some tupperware lids.

The idea of using other things than a bat was more creative.

Because it gives an extra challenge and makes funny noises. 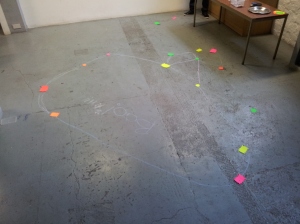 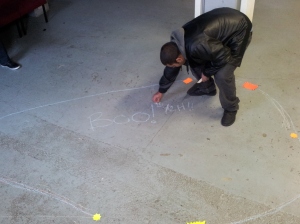 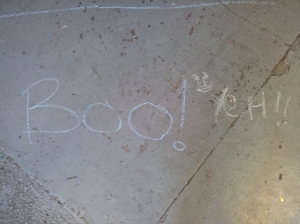 This is an upside down version of keepy uppy, using table tennis bats and a table tennis ball.  The aim is to keep the ball in the air for as long as possible, taking it in turns to tap the ball to each other. When a ‘mistake’ is made and the ball hit’s the floor, you place a star exactly where the ball landed, so as the game develops the trace of the mistakes turn into something potentially beautiful.

Mammadou developed this idea further last week by suggesting that we use the stars on the floor as the basis for a new artwork, joining the stars with chalk lines and finding something in the pattern.

We also played an upside down version of Table tennis as suggested by Bill Harpe.

In this version you play with the table placed against a wall, striking the ball at the wall as in squash,

Two referees stand either side of the table, quickly removing each post it note as it is struck.

The game continues until all of the post it notes are removed.

We were just working to get as many stickers as we can, we weren’t really working together. 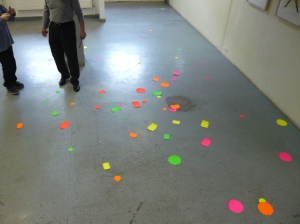 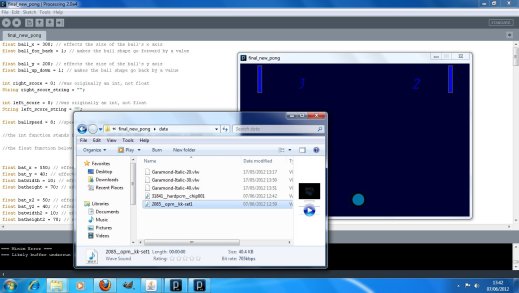 Today I added sounds to Pong,  in certain parts of the game. 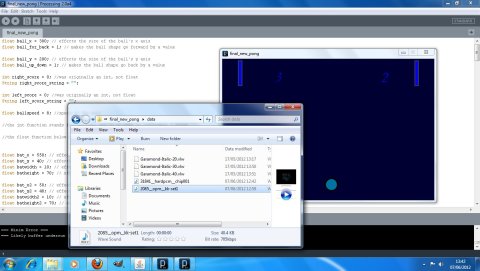 I did this by using an audio function which reacts upon impact situations.

Have a look at the game below.. 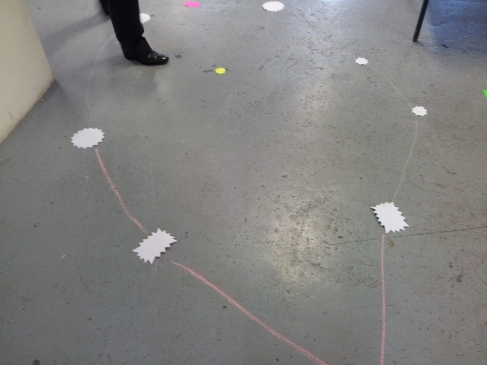 Today we played some differant type of games with a table tennis bat and ball.We played as well a game on the floor to keep the ball in the air with two people hit the ball to each other,everytimes the ball hit the floor we put a star on the floor where the ball hit. 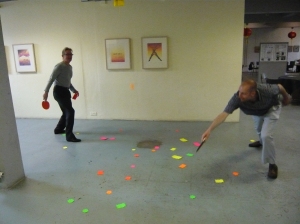 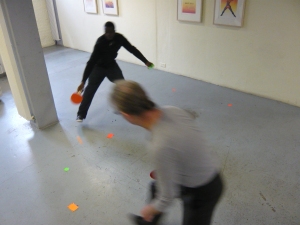 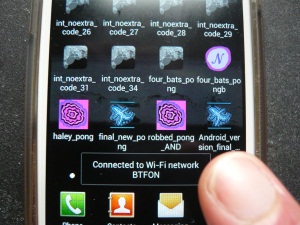 Today the group created custom icons for their PONG games.
They created the icons in Gimp and transferred the games to my phone to test that the icons would appear and that the games would open which they did.

Next week we will be looking at ways to make the games resize themselves tso that they play well on any sized device .

More importantly, we will be starting to think about how we can “upside down” Pong turning it from a competitive game into  something much more cooperative and creative, can’t wait. 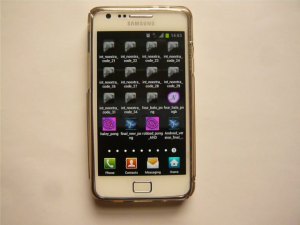 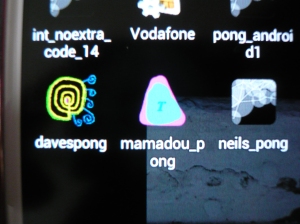 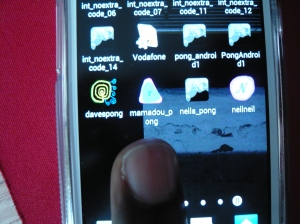 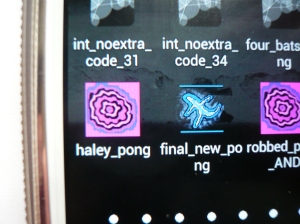 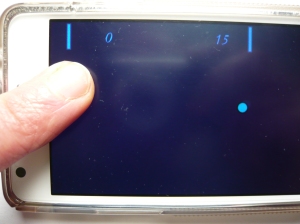 We were playing table tennis and having a mess around with the rules of the game the other week. We didn’t have enough bats to play in pairs, so I suggested we raided the kitchen for some pots and pans. Here’s what it sounded like, sound recording by Mammadou.